Opening doors for others: The first Black woman to become a CPA

Mary T. Washington Wylie in 1943 became the nation’s first Black woman to earn the CPA license, a notable achievement in a remarkable life filled with many accomplishments. Washington Wylie also made it her life’s mission to hire and mentor Black aspiring CPAs. Her story illustrates the importance of early Black CPAs’ success and the advances they made for future generations of accountants. 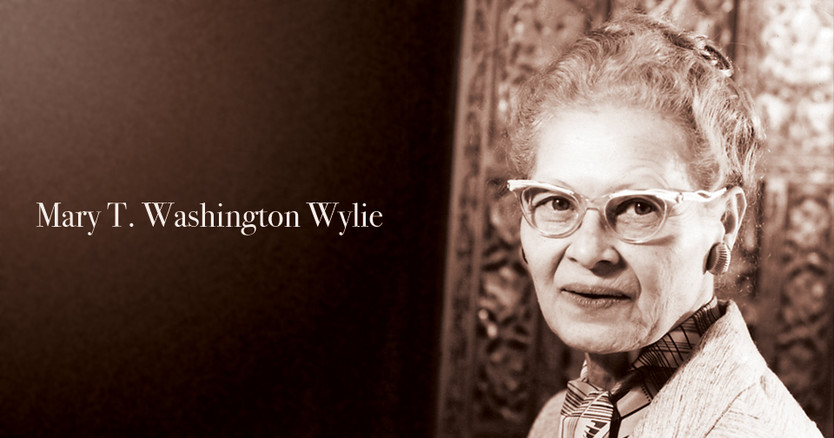 A decision to pay it forward

Born in Mississippi, Washington Wylie (1906–2005) was a young child when she was sent to live in Chicago with her grandparents after her mother’s death. Eager to escape a home life with an abusive grandmother, she was about to drop out of high school in her junior year, but a caring teacher took her in so she could finish her studies. “I think this was life-changing for her and helped her to become a giver,” said Washington Wylie’s granddaughter, Angie Spencer. “She decided to pay it forward, and she did in a big way.”

Always proficient at math, after high school Washington Wylie began working at Binga State Bank, a Black-owned bank. Bank vice president Arthur Wilson, who in 1923 became the second Black person to become a CPA, encouraged her to go back to school to study business and made sure she would have the experience she would need to qualify for licensure. She ultimately graduated from Northwestern’s College of Business in 1941, the only woman in her graduating class. Becoming a CPA in 1943, she started her own practice in her basement after no firm would hire her.

Among the 14 Black CPAs in the United States at the end of World War II (Washington Wiley was the 13th), one-half were in Chicago, according to A White-Collar Profession: African-American Certified Public Accountants Since 1921, by Theresa A. Hammond, CPA, Ph.D., accounting professor at San Francisco State University’s Lam Family College of Business. A large number of Southern Black people moved to the city seeking opportunity after the war, and many of the Black accountants there took it upon themselves to help other aspiring Black professionals.

Washington Wylie dedicated herself to making her firm a gateway into the profession for future generations. She hired her first full-time employee, Hiram Pittman, when she read about him passing his CPA Exam in a Black-owned newspaper. She later hired Lester McKeever, who could not find work at any other CPA firms. McKeever remembers her as a taskmaster and perfectionist. “You really grew under her,” he said.

Most clients of Washington Wylie’s firm were small Black-owned businesses and not-for-profits, along with numerous large Black-owned companies, including the Fuller Products Company, which made beauty products for the Black community. Its owner, entrepreneur Samuel B. Fuller, offered Washington Wylie’s firm office space in his company’s building, subsidized half of Pittman’s pay for six months when he was hired, and kept the firm on retainer for 35 years, according to Hammond.

Pittman and McKeever would become Washington Wylie’s partners, and McKeever would ultimately become managing partner of the firm, as well as chair of the Federal Reserve Bank of Chicago and a member of the Finance Transition Committee under Chicago’s Mayors Washington and Daley, among other achievements. For him, Washington Wylie’s “great strength was her love of the profession and of the African-Americans who aspired to grow in it,” he said. When Washington Wylie retired, the firm gave her a gold bracelet with about 30 charms, each one with the name of someone who earned their CPA license while working for her, he recalled. Her firm grew to become one of the largest Black-owned firms in the country. In 2018, the country’s largest minority-controlled accounting firm, New York-based Mitchell Titus, acquired most of her firm. A division of Washington, Pittman & McKeever continues to this day.

Washington Wylie also had a strong commitment to family and community. She was the mother of five children and grandmother of nine. “She loved to cook and did her own laundry on an old-fashioned washing machine that you fed through a roller,” her granddaughter remembers. “She taught us how to make homemade ice cream, and she enjoyed making spiked eggnog for Christmas.” The grandchildren gathered at her house on Sundays so their grandfather could teach them to play pool. Washington Wylie worked on taxes at a desk nearby but always stayed part of the fun.

For her 95th birthday, the family asked loved ones to skip gifts and instead write testimonials about something Washington Wiley had done for them. The outpouring of examples of her generosity was overwhelming, with stories of her giving people down payments for homes and for the headquarters of a  sorority that supports Black professional women, helping to pay off a mortgage, or sending a child to college. “Everyone benefited because of her, and we were grateful,” Spencer said. Washington Wylie retired at 75 and lived to be 99. “Even toward the end of her life, she used to love to help my children with their math homework,” Spencer said.

In honor of the 100th anniversary, the 40 Under 40 Black CPA Award has been established to continue to build upon progress made by recognizing young Black CPAs for influencing the profession, breaking barriers, and making an impact on the community. Please share this information with those that meet eligibility requirements.The application consists of personal information, three short essays, resume and headshot upload, and one letter of recommendation. There is no limit to the number of applicants from one employer.
Applications must be submitted by August 15, 2021.
APPLY NOW!

Her influence and example extended even to those who never knew her. “Early female CPA leaders and pioneers are critically important to the profession because they confirm that, if given the opportunity, people and particularly people of color can thrive and add value not just to their own firms or employers but to their communities at large and the league of professionals that follow in their footsteps,” said Genevia Gee Fulbright, CPA, CGMA, president and COO of Fulbright & Fulbright CPAPA  and former chair of the AICPA Minority Initiatives Committee, which initially formed in 1969 and in 2012 evolved into the AICPA National Commission on Diversity and Inclusion. Such strong leaders can help the generations to come by providing hope, opportunity, and financial stability, she said. “I have been inspired by Mary Washington Wylie’s story to continue to mentor others and strive to serve as a positive example of what can be, as well as to create opportunities for others.”

In one example of the recognition of Black women in the profession, the late CPA and professor of accountancy Sybil Collins Mobley has been named a 2021 inductee into the Accounting Hall of Fame. She is the first Black woman CPA to be conferred that honor.

“Visionary, Trailblazer, Mentor.” Those words were printed on banners that hung on lampposts in Chicago in 2018 when the city honored Washington Wylie on the 75th anniversary of her becoming a CPA. Mentored by a Black CPA, she made it her life’s mission to hire and train others, open doors, and inspire future generations.

About the author: Anita Dennis is a freelance writer based in New Jersey.

Editor’s note: 2021 is the 100th anniversary of the first Black CPA. These articles are part of a series to celebrate the centennial through profiles about some of the initial 100 Black CPAs as well as others who have blazed the trail and paved the way for future diversity in the profession. To view more articles go to bit.ly/BlackCPAcentennialStories.